There have been various Super Mario Bros. mods for Minecraft. We’ve also featured the upcoming Pokémon mod on Mojang’s blocky sandbox. And now, with Zelda Adventure, the migration of Nintendo’s holy trinity is finally complete. Created by Minecraft forum member Gary520, Zelda Adventure is a map that works with the Adventurecraft standalone mod for Minecraft. 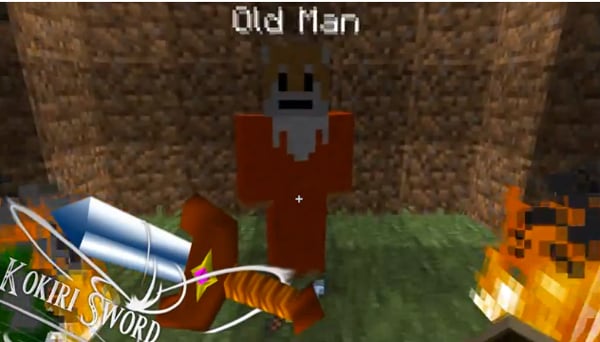 The map was inspired by the original game, but Gary520 also borrows elements from different Zelda games. For example, the map’s first four dungeons were based on A Link to the Past, while the fifth dungeon was patterned after Ocarina of Time. Three more dungeons will be added in the final version of the map. As you’ll see in the trailer below, Zelda Adventure lets you play as Link in first person. The final map will also have more than 20 weapons, including the Kokiri Sword and Shield, bombs and the Ocarina of Time itself, complete with songs to play. Also the Old Man looks exactly the same. I consider that a gameplay feature.

Creepers are no match for the wielder of the Triforce of Courage. Summon Epona and journey to the Minecraft Forums to download the Zelda Adventure map (currently at v0.9.5). Again, you’ll also need the free AdventureCraft mod to play the map.

[via GameInformer via Kill Screen]