I would like a glowing cat just for the fact that I tend to step on the dumb felines at my house because they don’t get out of my way when it’s dark. If they glowed, I would be able to see them, not step on them, and when they barricade themselves under my bed I could find them. These cute glow in the dark cats have a higher calling than just making it easy to find them at night. 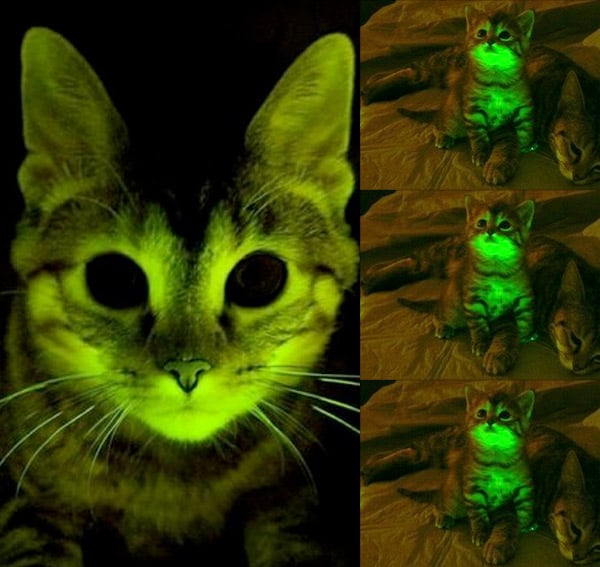 Scientists have inserted an anti-viral gene into the genetically engineered cats that help the resist the feline form of AIDS. The gene for a fluorescent protein called GFP was also inserted into the cats as well. Apparently, the glowing gene was simply inserted as a way to monitor the activity of altered genes. “We did it to mark cells easily just by looking under the microscope or shining a light on the animal,” said Dr Eric Poeschla, from the Mayo Clinic in Rochester, US.

The genes for glowing and for resisting feline AIDS were inserted into the feline eggs known as oocytes. Both cats and humans have proteins that typically fight infections that are not able to fight AIDS, whereas the anti-viral gene helps produce a protein that can resist AIDS-causing viruses. The researchers report that there was a reduced replication of the feline AIDS virus in the (glowing) cats with the additional gene.