The last couple of times we talked about slingshots made by our pal Joerg Sprave it was either chunking iPhones as the ammo or destroying cars. This time around, Sprave is back with a slingshot that uses more common ammo in the forms of big ball bearings. The crossbow is notable for its easy loading action and small size though. 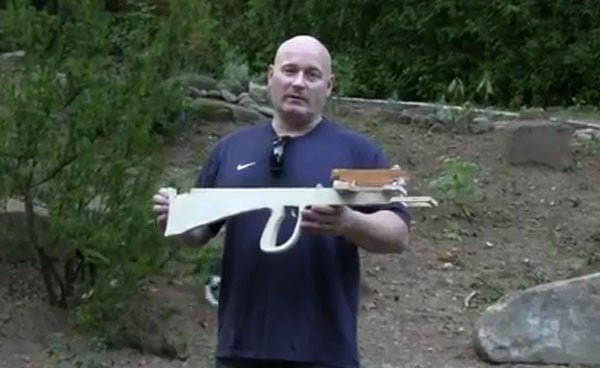 Sprave designed the slingshot crossbow to be easy to handle and load. It has a foothold you put your foot in and the thick rubber bands are on rollers to make them easier to pull back. When you pull the trigger, the slingshot seriously hurls those ball bearings. I bet it could crack a skull. Oddly, this is one of the safer designs I have seen from Sprave.

The bullpup design of this slingshot is just over two feet long. Sprave says that the slingshot in the video isn’t done. It needs more sanding and a cool paintjob. He also notes it will be much stronger when done. Apparently, he was using softer rubber bands. I dare you to watch this without focusing on the fir tree attack kitties in the background.