This amazingly deadly robot was built by Robert Beatty and his daughters. Note to all of his daughter’s future suitors… Run! This thing is called Mechatron. It sports mecanum wheels and has a deadly electric gun mounted on top. It can move forward, backward, sideways, and diagonally. And it can do so while firing metal or plastic pellets at the same time. 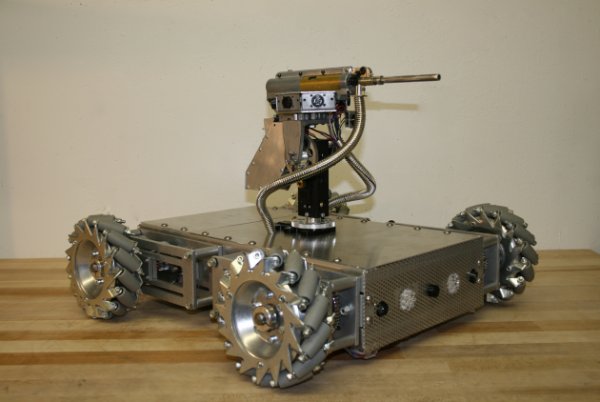 Mechatron is a very useful forty-five pound robot that manages to be super agile. The colored LED light show beneath corresponds to which direction it is moving in and it also changes as it shoots, which makes for a pretty show.

An Arduino Mega, Arduino Nano, 12 Maxbotix sonar sensors, 4 motors, Xbee radio, custom gun turret, Hitec Digital servos, MP3 Sound Board, lots of LEDs and more were used to create it. And metal armor plates of course. Another cool aspect of this bot is the old-school robot voice that it uses. This is one awesome creation. Robert and his daughters make quite a robotic team.

[via Arduino Forums via Robot Living]