These new Corsair Vengeance keyboards and mice are made specifically for gaming. They each have a sturdy aluminum chassis, and have high quality Cherry MX Red key switches.

The K60 has specially contoured and textured WASD and 1-6 keycaps, and they’re bright red so you don’t miss them. The keys can be easily replaced when they falter after long gaming sessions, and are easy to clean because of the way they are raised. There’s also an ergonomic wrist rest that’s nice to have. 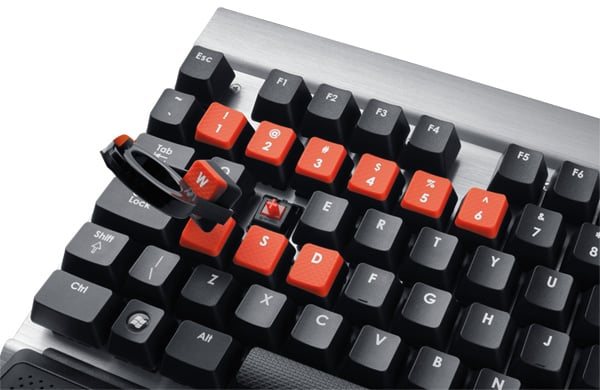 Both keyboards come with anti-ghosting tech, meaning that if you mash a few keys at once, you won’t get glitchy responsiveness. Response time is 1ms and it’s supposed to be very responsive to double- and triple-taps. There’s another keyboard that Corsair released, the K90, but it looks a bit too big to me.  The added size comes from 18 programmable keys on the left, which are made for MMOs. But it does comes with cool LED backlighting, which is always nice.

I prefer how minimal the K60 looks. Corsair also released matching mice. Both offer 5700 DPI precision, an aluminum body, and a heavy-duty scroll wheel. The K60 mouse even has a special “sniper button,” while the M90 mouse comes with 15 programmable buttons! Personally, I’d match a K60 keyboard with a M90 mouse.