With OS X Lion, Apple did one thing that absolutely no one in the world asked for: make OS X look, feel and act a bit more like iOS. These changes and additions are minor and are all optional or revertible, but still. Clearly Apple will be introducing something in the next few years and are easing us users into it. Meanwhile, they’ve neglected what some iOS users are asking for: make iOS act a bit more like OS X. For instance, a built-in file manager would be nice. Well, if you want something that Apple won’t give you, there’s the jailbreaking community for that. Behold: the Lion Ultimatum theme. 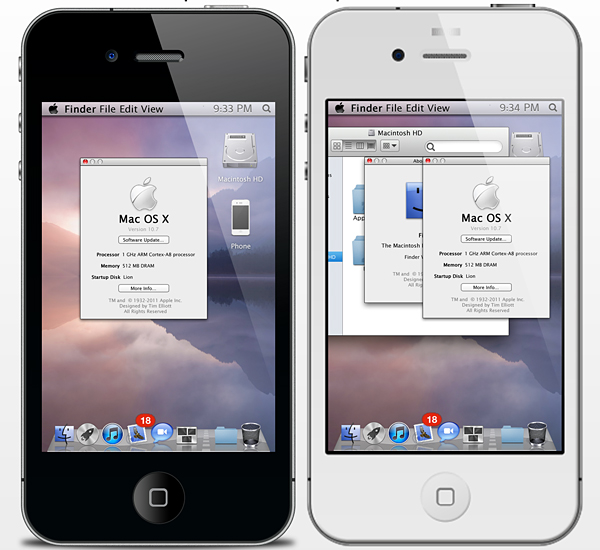 Made by college freshman and ModMyi forum member Timothy Elliot, Lion Ultimatum is indeed a theme, but it goes beyond skins and icons. For better or for worse, it overhauls the iPhone and iPod Touch interface, making it look like OS X. It has a working Menu Bar, working Finder windows – with the ability to drag windows and have multiple windows open – a scrollable dock, the Dashboard and its widgets (which ironically are really only useful in a portable device like the iPhone and iPod Touch), a lock screen with phone, mail and SMS notifications and more.

Check out Timothy’s thread on ModMyi for more screenshots as well as information on how to download Lion Ultimatum (of course it requires a jailbroken iPhone to install.) I know what you’re thinking – why didn’t he show it working on the iPad? Because it’s not compatible with the iPad. Timothy is a busy man and right now he just doesn’t have the time to make an additional theme for the tablet’s landscape mode. Sorry iPad users.