We’ve seen a concept for a pair of headphones that resemble a stethoscope, and there’s even a (low-rated) stethoscope app for iOS devices. But this simple hack developed by University of Oxford scientists Thomas Brennan, Gari Clifford and David Springer can really turn a phone into a stethoscope. It is attached to a phone’s 3.5mm jack, so even cheap dumb phones can be used. 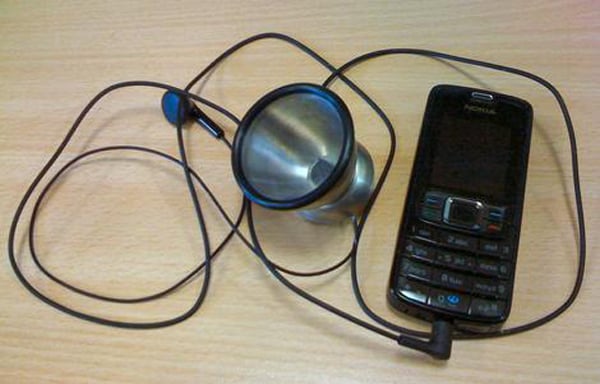 Brennan was motivated by the number of post-diagnosis deaths of patients afflicted with tuberculous pericarditis, a condition affecting about 2% of TB patients that could lead to cardiac arrest. He wanted to develop a cheap and easy way for patients to record their heartbeats on their own. The prototype you see above was made using a headset and an egg-cup.

A rubber O-ring and a piece of clear plastic are attached to the listening end of the egg cup to “ensure a good seal” to a patient’s chest. The custom software developed by Brennan, Clifford and Springer lets users record the phonocardiogram – the sound from the heart – then send the file to a specialist. It also has a built-in signal processor so it can identify poor recordings and ask the user to repeat the procedure, as well as a custom algorithm to “reliably identify heart rate and heart sounds.”

Brennan and company conducted a clinical trial from January to April of this year and compared the results that their device – connected to a Nokia 3110 Classic and then to an iPhone 3G – obtained with those from an actual electronic stethoscope. Amazingly enough the readings from the lowly Nokia bested the ones from the dedicated stethoscope, although the former also had a lot of low quality recordings. Brennan isn’t stopping here – he and Springer are working on an Android app version of their software. He also wants to see if their invention can be used to analyze other heart-related diseases.

[University of Oxford via Medgadget via Ubergizmo]