Real bonsai can be very beautiful and relaxing, but they also require much skill, care and effort. Vivien Muller’s plastic bonsai on the other hand is easy to use and actually takes care of you. Or at least your gadgets. As you’ll see in the picture below, the Electree Solar Bonsai has small solar panels in place of leaves, and instead of roots it has a fairly large battery hidden in its base. 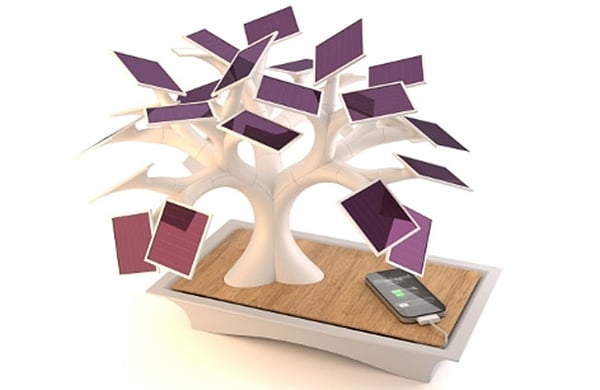 The 27 solar panels can be individually adjusted, so you can tweak them for optimal exposure to sunlight or for aesthetic purposes. The Electree’s battery has a maximum charge of 13,500 mAh and takes about 36 hours to be fully charged via sunlight. You can then charge your gadgets using Electree’s built-in USB connection. Muller and the Electree are featured in the video below. It’s in French though so I can’t tell you what they’re talking about. They make nice silky sounds with their mouths, that’s as far as I can tell you.