The Padzilla is a case in the same way that Daimos is a case for Kazuya Ryuzaki. Developed by a company called Crunchy Logistics, the giant touchscreen accessory can super size the display of the iPad, iPhone 4 and iPhone 3GS. It doesn’t require a jailbreak or an app either. It’s plug and play so all you need is a lot of money. 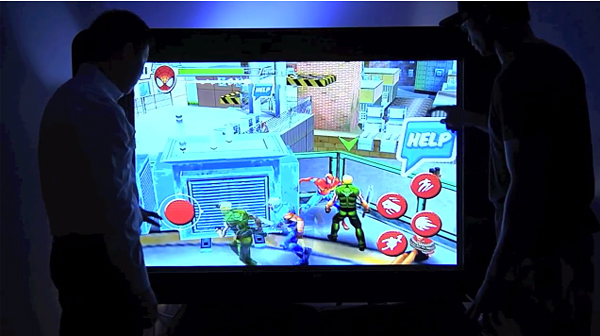 The screen in the shot above and in the video below measures 70″ (diagonally), but Crunchy Logistics can make even larger ones, up to 150″. Playing Angry Birds might be a form of exercise on a screen that big.

That was awesome. Digital or not, I think board games really need a larger surface to shine. Playing Infinity Blade or Fruit Ninja on the Padzilla could get tedious though.

CEO Neil Dufva told TechCrunch that the 70″ Padzilla display will cost about $30,000 to $40,000 (USD). An iPad is included with the cost, but that’s a small consolation. Crunchy Logistics is willing to rent a Padzilla to people with shallower pockets though, I’m just not sure what the rates are. Check out the company’s website for more info.