With Apple slowly integrating touch-friendly icons and other functionality to their desktop operating system, I think it’s only a matter of time before we see touchscreen iMacs. But it looks like one man just beat them to it. Yesterday we saw a huge touchscreen case for the iPad and iPhone. The MegaPad concept, on the other hand, is nowhere near as large as the Padzilla, but it’s also about than 1/60th of the cost. It’s not just a case too – it’s a standalone device. I hesitate to call it a tablet because it measures 23″. 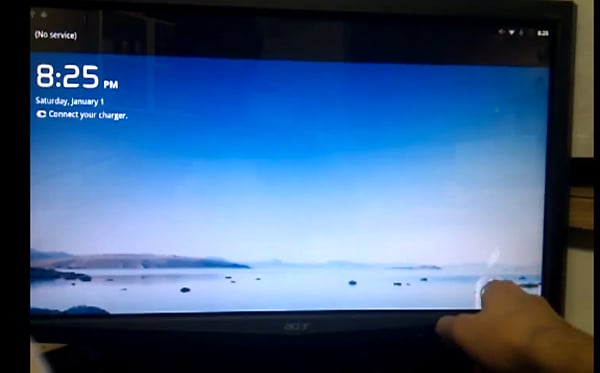 The MegaPad was hacked together by Martin Drashkov. He believes that there is room for a touchscreen device as large as this, citing two-person computing and gaming as one example (Arthur Nishimoto’s awesome set up comes to mind). Drashkov used Android for his device because he believes that the “openness and flexibility make it the only modern touch-based OS that is able to be adapted for uses beyond what’s currently available in the market.” He didn’t mention which flavor of Android his MegaPad is on though.

As I said earlier, this thing is relatively cheap – Drashkov claims he put it together using off-the-shelf parts with a total cost of less than $600 (USD), less expensive than high-end versions of some tablets. I’m still not totally sold on a device this large having a touchscreen only interface. Also I think it would be better if Drashkov made it so the MegaPad could be positioned horizontally or at least at an angle so you can work on it like a desk and make it easier for more people to use it simultaneously. I’ll update this post when Drashkov releases the MegaPad’s specs, but if you want you can also directly keep an eye out for the details on his blog.