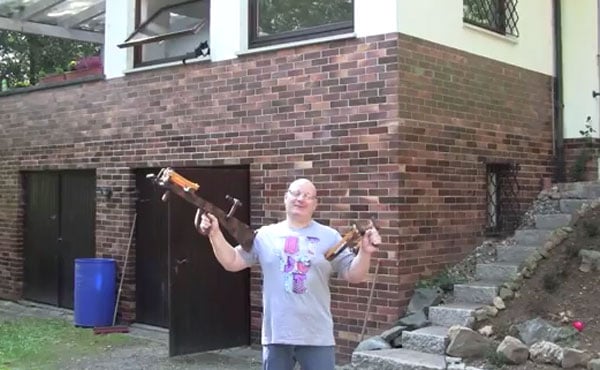 He is also shooting the slingshots over a device that measures just how fast the ball bearings are moving. They’re certainly moving fast enough to do some major damage if they hit a person or one of the prancing attack cats Joerg keeps about the property. You can see one reclining waiting for a hapless human to walk under the window above Joerg.

This time around, he shoots the slingshots at a piece of wood and at a strange German beer keg. He does note that the beer had gone bad, so he opted to shoot the keg and put it out of its misery. The crossbow slingshot was slightly faster firing ball bearings than the handheld design. However, the handheld design managed to shoot through the keg whereas the crossbow didn’t. Even so, you wouldn’t want to be hit by any of Joerg’s weapons.