LANDBEARSHARK Motorized Skateboard with Treads: Another Way to Die?

Ever since I first saw motorized skateboards, I always thought that there were a really great way to get around. Now that I’m older and saner, I know for a fact that these contraptions can’t be too safe, especially when you don’t have many ways of slowing down. This particular motorized skateboard was created by The Miters from MIT, and it premiered at the World Maker Faire in New York. 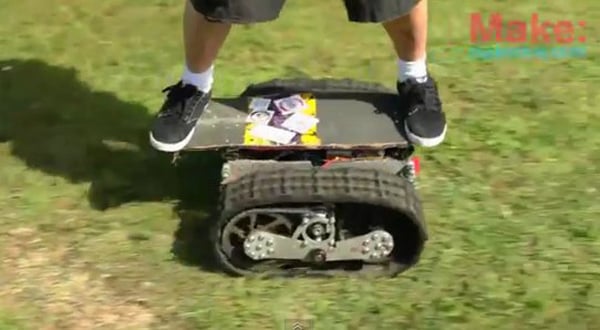 Charles Guan is the one who rides this thing (designed, created, and built it as well), and it gets around on a pair of treads, which makes it different than wheeled boards, and lets its passenger ride off-road.  The skateboard boasts a custom drivetrain, 500-watt hours of lithium batteries inside of it, and a 1HP motor to tug you around. Top speed is 15 to 20mph, which isn’t bad.

The LANDBEARSHARK tread skateboard still needs a remote control to function for now, but Charles thinks that once this thing is perfected, it will do without.