When you think of a tablet, images of an iPad or a Samsung Galaxy Tab or a Kindle Fire probably pop into your head right away. Regardless of what brand of tablet you’re thinking, the picture in your head is probably a rectangular, touchscreen tablet ranging from a 7-inch to a 10-inch screen. 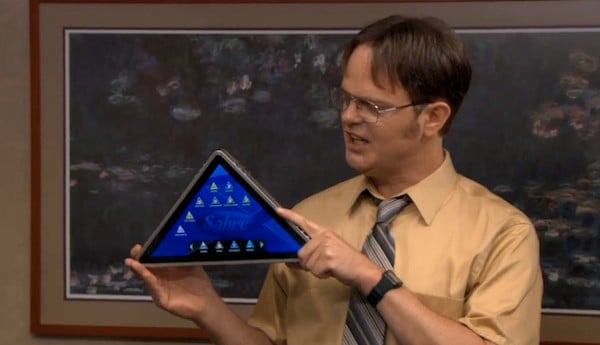 So when you see this strangely-shaped device on NBC’s The Office, you probably won’t think it is, out of all things, a tablet. But it is. It was launched last Thursday on the show, becoming the first ever tablet to harness “pyramid power.” It’s release was sort of overshadowed by that of the Amazon Kindle Fire, which is why you might not have heard of it – until now, that is.

Sabre’s triangular tablet weighs a little less than three pounds if you don’t attach the optional battery pack and memory booster. Dunder Mifflin’s Dwight Schrute presented the new tablet to the crowd, and while it doesn’t look like it has any cameras whatsoever, it does have a 50L memory capacity.

[via Gadget Lab via Dvice]