I tried to avoid posting something Minecraft related because I just shared one the other day. The Internet is filled with many, none-Minecraft related, yet geeky treasures, but this is simply too mind-blowing not to share. Those of you who play Minecraft may be familiar with the name Kakermix, who continually releases the Technic Pack, a collection of mods for the game. One of the mods in the pack is by someone else named SDK. Simply called the Gun Mod, it adds, well, just look: 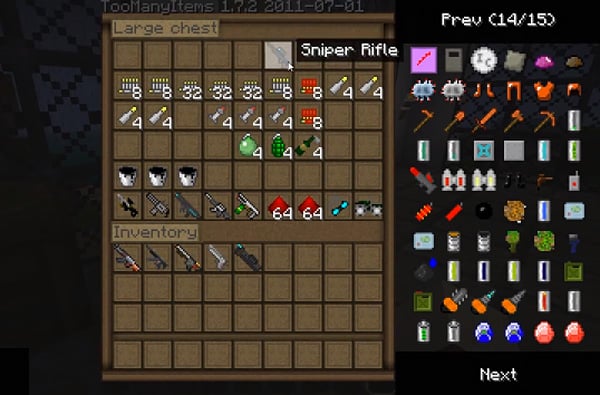 Yep. SDK’s Gun Mod adds a ton of weapons to Minecraft, from Molotov cocktails, to a rocket launcher, to a laser gun that automatically cooks any animal it zaps. It even comes with an ATV, or at least a rectangular vehicle with wheels on it. It also has a jetpack! Yeah! Unfortunately that aspect of the mod is still buggy – it’ll kill your character as soon as it lands, probably from the sheer thrill of riding a jetpack.

Watch the video by Yogscast below for more about SDK’s Gun Mod and the Technic Pack. You might want to lower your volume before watching the video, because it’s filled with cackles, moans and gasps. Language is also NSFW. It’s just that awesome.

Again, the video above showcases the entire Technic Pack, but it’s SDK’s Gun Mod that adds the weapons. As far as I know both the pack and the mod currently only work with v.1.7.3 of Minecraft. You can download the Technic Pack auto-installer over at Minecraft Tinkerer, while the Minecraft Forum is the place to go if all you want is the SDK Gun Mod. The Creeper isn’t so scary when you’ve got a flamethrower eh?