Insect-Powered Smartphones (and a Praying Mantis on a Unicycle)

You know what I love about the whole viral video advertising trend? At least it makes advertisers and agencies look outside of the traditional blah 30- and 60- second ad spots that treat consumers like idiots, and instead to do something entertaining and attention-grabbing. Sure most produced “virals” are crummy, and at the end of the day, these spots are still commercials, but every so often one drops into my lap that makes me squeal like a little girl. This is one of those times. 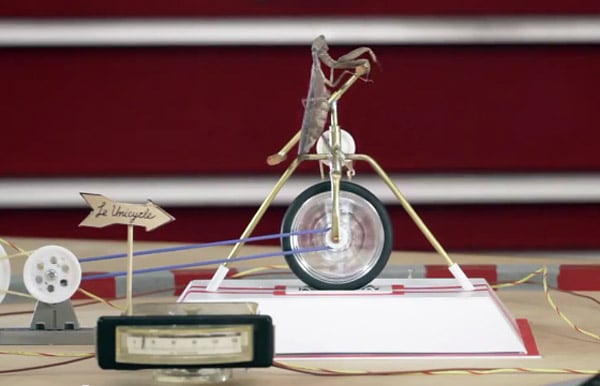 The guys at Qualcomm put together this clip featuring a miniature circus, starring insects as the performers. But this isn’t some old flea circus. Nope, this is a high-tech big top, where the bugs perform daring feats to power a smartphone. Sure, it happens to be a Qualcomm Snapdragon-powered smartphone, but I don’t care. It’s still awesome. I mean what was the last time you saw a praying mantis ride a unicycle? Or a tarantula on a treadmill? Never, right?  But enough of my yakkin. Check out the video for yourself.

Wasn’t that great? The only thing better would have been better would have been to power the phones with Komodo dragons instead of insects, since that might have been more appropriate for the brand. Now I associate Snapdragon smartphones with a bunch of big bugs. Not the perfect message for a technology commercial, eh? Oh well. Still, it’s pretty damned awesome, so I’ll give Qualcomm a break.