In the world of high-end cameras for shooting movies and video, the RED brand is at the top. These cameras are so awesome that they are what major directors are now using to film Hollywood blockbusters. The last video camera to surface from RED was called the RED Epic and the camera has a whopping 5K resolution. 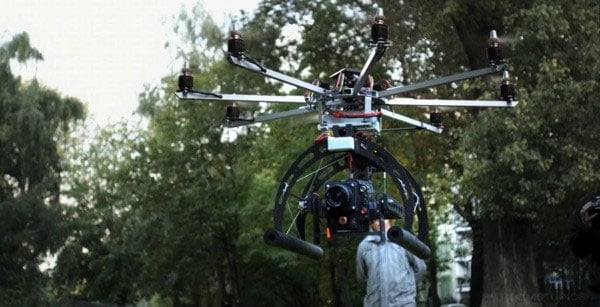 The big shocker is the price, you can buy a very nice new car for the price of one of these Epic cameras – but they’re still cheaper than high-end 35mm and 70mm cameras. I like RC toys as much as the next guy, but I would never fly the creation the folks at OMStudios in Germany have put together. The system is an octocopter with eight little motors and propellers arrayed around a horseshoe underneath the copter.

Inside that big horseshoe shaped opening sits one of the crazy expensive RED Epic cameras. The copter can fly up to 150 meters in altitude and record in shocking clarity. I would rather not think of the repair bill if you crashed this awesome RC toy.