We’ve seen plenty of footage of BigDog and AlphaDog, but there’s a new robot dog in town, this time coming from South Korea’s SimLab. What’s interesting and at the same time creepy about this one, is that it walks around pretty quietly and seems to move swiftly and with more confidence. 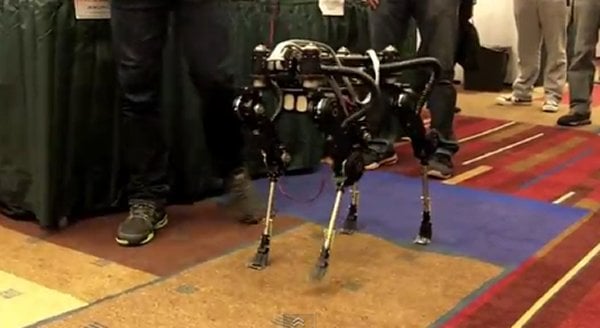 Don’t be fooled by the apparent lack of traction shown in the video. They put tape on it’s feet so it wouldn’t dig in and hurt carpet at this trade show. Take that tape off and you can see that it would walk extremely well.

As noted in the video, it doesn’t move backward, apparently because most animals don’t like to walk backwards either. Instead they turn. It’s pretty neat, but now we have too many robot dogs and not enough robot dog cages for my liking.

[via IEEE Spectrum via Popsci]