Attention parents who always buy the wrong thing: Nintendo will release a Holiday Wii bundle this October 23. I suggest that you don’t buy it. Even if the console and its controllers are in sleek black. Even it if it includes the New Super Mario Bros. game and a CD of the Super Mario Galaxy soundtrack. Because Nintendo is pulling a Sony here, removing backwards compatibility for Gamecube games. 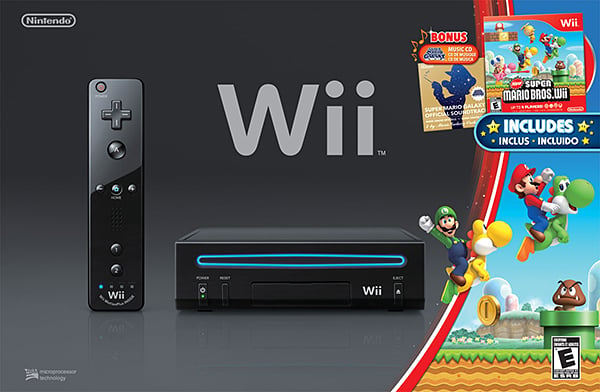 This new, but worse Wii is also horizontal-only, while the older consoles can be positioned upright. That’s not a big drawback by any means, but it’s salt in the wounds of gamers who have been loyal to Nintendo. I’m still really disappointed that I can’t play PS2 games on my PS3 knowing that earlier the models had that capability. I wouldn’t want people who own both Wii and Gamecube games to feel that sting of disappointment either.

Fortunately you can still have a happy holiday and order the bundles that have the older version of  the Wii – in both white or black –that supports Gamecube games. Those bundles – which come with a copy of Mario Kart Wii and the steering wheel accessory – are sold for $160 (USD), just $10 more than the stripped-down Holiday Bundle, but if you have several Gamecube games then I’m pretty sure this is still a no-brainer.