Fully Remappable PS3 Controller: It Only Does Every Button.

Disabled gamers still have limited options when it comes to customizing controllers to better suit their condition. Fortunately, there are kind hearted souls who are working on a solution, like the folks at Evil Controllers and the Able Gamers Foundation, who have released a controller made specially for the disabled. Here’s another potential alternative from one of the masters at Acid Mods, a modder going by the name of Hazer. He modified a PS3 controller so that all of its buttons can be remapped to any of the other buttons. 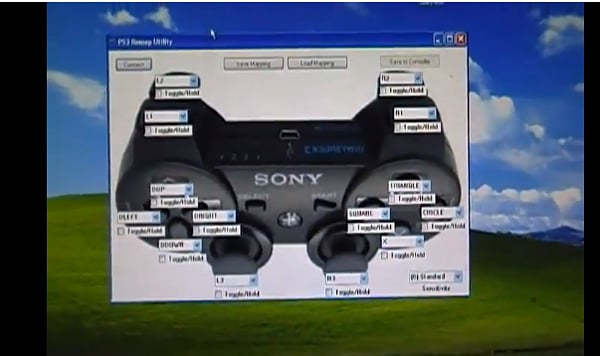 As I mentioned above, Hazer’s PS3 controller is fully remappable, save for the select and start buttons and the analog sticks (the L3 and R3 buttons can be remapped, but not the directional functions of the sticks). You can even configure multiple buttons to act as the same button, e.g. you can set all of the buttons to Circle if you wished.

I’m not even going to attempt to discuss the hardware wizardry that Hazer pulled off in order to make the controller remappable, because frankly I can’t understand a thing about the process, only that the final product can easily be configured via a complementary Windows program, the one shown in the screenshot above. Here’s a brief video by Hazer (you might want to turn the volume down for this one):

Hazer made the controller for Chuck Bittner, a quadriplegic who has petitioned major video game companies to incorporate fully modifiable button configurations in video game hardware and software so that disabled or injured people can still play. Below is a video showing Chuck using the modded controller (now you can turn the volume back up so you can hear Chuck better):

If you’re a tinkerer yourself, you can check out the details of the mod on Hazer’s thread at the Acid Mods forum. Links to the necessary files are also there. I’d just like to point out that Hazer is getting frustrated with other people stealing his work, so it’s quite generous of him to even bother sharing the details of this particular build. Given his past experience he could have just given the controller to Chuck without telling anyone how he made it. If you’d like to have your own remappable PS3 controller but don’t know have the modding skills, Hack A Day suggests that you visit the Mods for Hire section of Acid Mods and see if you can make a deal with one of the guys there.

[via Hack A Day and Acid Forums]