Generally, when we talk about the wild man with slingshots, Joerg Sprave, he is trying out a new slingshot. Joerg has something a bit different he is talking about this time around and it’s actually pretty interesting. He figures that there are a number of weapons that could make it through airport security so he decided to test out some non-metallic weapons on ballistic gel. 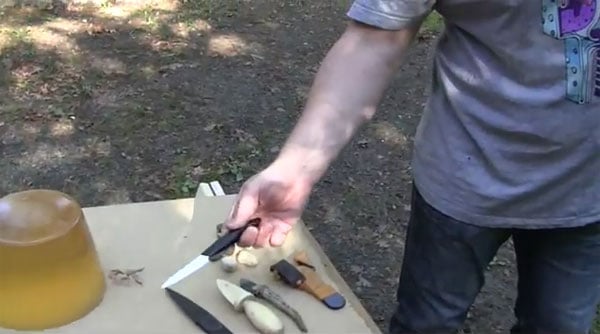 He uses various knives including some made from ceramic and some made from flint rock and deer horn. Naturally, there is a sling shot in there. Joerg is using a little slingshot that is made from carbon fiber. The ammo for that slingshot rather than the metal ball bearings he normally uses was some larger pebbles.

As you might expect, the knives all sliced and stabbed well. The slingshot was what amazed me. I have often wondered what hitting the gel with a rock would do. I thought it might just bounce off. The rocks actually penetrated into the gel by a significant margin. Those rocks and that little slingshot could certainly do some damage. Let’s hope that the TSA actually screens for non-metallic weapons with body scanners and X-Ray machines to keep this sort of stuff out of the skies.