You can find advantages and disadvantages in almost every thing, person, or situation. iOS 5 is no exception. I mean, you get a new notification center, a new messaging service to keep in touch with friends and family, and a reminders app that makes making to-do lists a cinch. 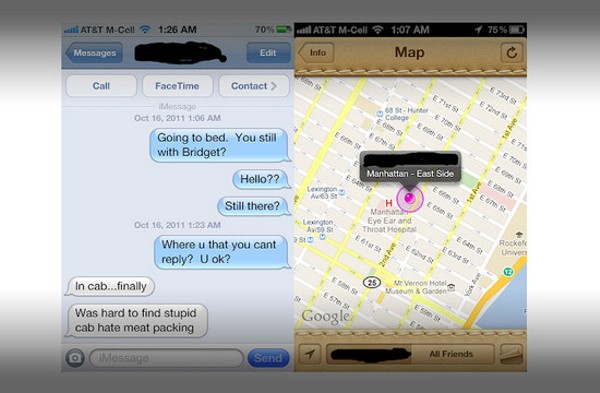 And then there’s the Find My Friends app. It’s great for people to catch up with their friends and acquaintances who are on the go. It’s also an app that some distraught husbands (or wives) can use to track down where their spouse is.

And that’s exactly what this guy used to find out if his wife was cheating on him or not–and it turns out that she was. Well, sort of. The following post was put up by Thomas Metz on the MacRumors forums earlier this week:

I got my wife a new 4s and loaded up find my friends without her knowing. She told me she was at her friends house in the east village. I’ve had suspicions about her meeting this guy who live uptown. Lo and behold, Find my Friends has her right there.

I just texted her asking where she was and the dumb b!otch said she was on 10th Street!! Thank you Apple, thank you App Store, thank you all. These beautiful treasure trove of screen shots going to play well when I meet her a$$ at the lawyer’s office in a few weeks.

thankfully, she’s the rich one.

I think Tom here definitely caught his wife (maybe soon-to-be ex-wife) in a huge lie here, but he’s going to have to put more than just some app screenshots on the table to prove that she was committing adultery. I doubt this is the first time someone was caught lying (or cheating, if that’s the case) because of an app, though. Others probably didn’t post their findings on the Internet like Metz did, though.