Robot Programmed to Pick Up Poop: It’s Sh*t Like This That Will Bring Skynet on Our Asses

The nerds at the University of Pennsylvania’s GRASP Laboratory seem to be fond of acronyms. As you may have guessed, GRASP itself is an acronym for General Robotics, Automation, Sensing & Perception. These are the guys that doomed all of humanity by programming a robot to pick up poop, and I wouldn’t be surprised if they did the acronyms for the project came first before the actual project itself. 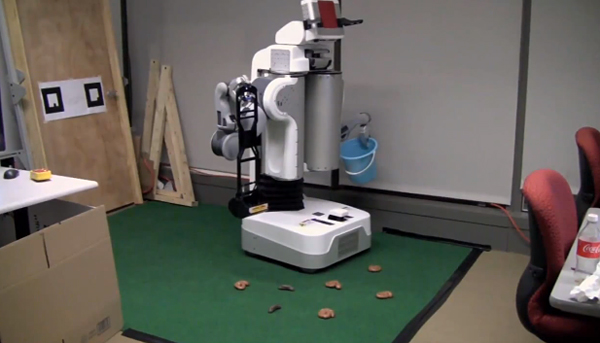 The GRASP Lab programmed Willow Garage’s PR2 robot to pick up POOP (Potentially Offensive Objects for Pickup) using a routine they call POOP SCOOP (Perception Of Offensive Products and Sensorized Control Of Object Pickup). You clever guys you. By definition, POOP can be anything, but of course the cruel humans chose actual poop as POOP. The PR2 uses its color camera to detect the POOP and haptic feedback to detect if it successfully scooped it. To add insult to poop and salt to crap, they even programmed their robot to say, “time for me to scoop some poop” before it carries out its duty.

How long before the robot decides that we are POOP? At least the folks at GRASP Lab will be the first to get scooped.