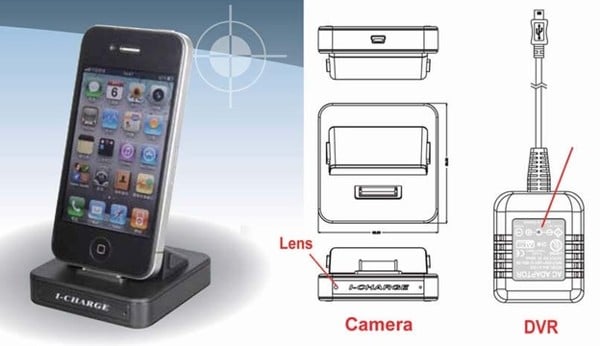 The iCharge is equipped with a motion-activated 450 TVL Color CCD camera so it starts rolling once it detects that someone’s in the room or approaching it (maybe to swipe it?) Of course, it would probably be a good idea to keep your room locked and bring your iPhone with you if you’re leaving the room, even if it’s running low on power, but hey, that’s totally up to you.

The iCharge records video using the included 4GB of memory, which can be expanded up to 32 GB. The iCharge retails for $395 (USD), which is extremely pricey for what it does. I mean, you could buy a really nice new smartphone with that kind of money in the first place. And there are plenty of apps which let you use the iPhone itself as a spy camera.