With silly product names like “Wii”, “PSVita”, “Siri”, and “Xperia,” sometimes it’s nice to be able to look at the name of something, and then when you see it, you say “that’s exactly what I expected”.  The Senseless Drawing Bot delivers precisely on its branding expectations. 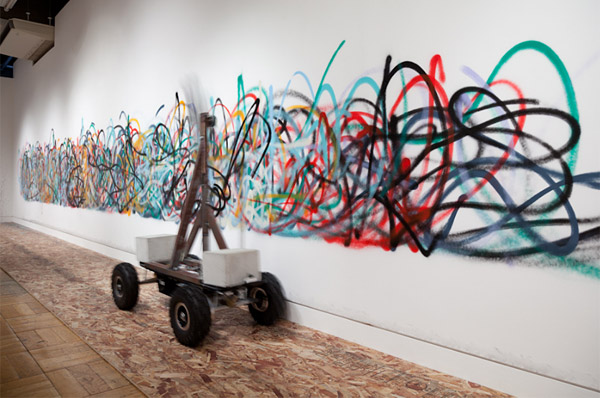 This unusual robot, designed by So Kanno and Takahiro Yamaguchi serves a single purpose – to draw senselessly. Ok, it actually uses a can of spray paint, so it really should be called “Senseless Painting Bot”, but I’ll forgive them that one minor issue. Here, let’s watch the bot as it churns out some of its senseless art:

I love how its arm gesticulates wildly as it rolls its way along the wall, painting abstract images. I wonder how long it would need to keep going for before it actually randomly spelled a word. It’s amazing how something so senseless can still be so intriguing, don’t you think?