Robots that have the capability to build other robots sound pretty freaky. I mean, there have been so many sci-fi movies released that somehow all end up having the same basic storyline: man invents powerful robot, robot outsmarts man, robot builds robot army, robot army takes over the world.

These robots used to exist only in the world of fiction – until recently. 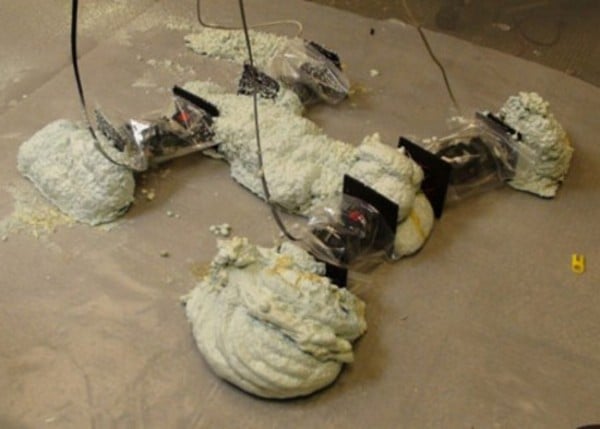 Meet the FoamBot, the modular robot that can “multiply” by building more robots out of foam. What makes a modular robot different from a regular old robot is that it is actually built to adapt to its surroundings or perform new tasks where needed, depending on the situation.

The Modular Robotics Lab at the University of Pennsylvania took things further by coming up with a new way to create and construct new robots using spray foam. Here’s the FoamBot at work, slowly building a quadruped bot:

And here’s the FoamBot again building a creepy snake bot:

The foamy robot can also be used for other purposes, such as shooting out foam to deploy permanent doorstops and to pick up hazardous objects. The Modular Robotic Team sees a bright future for the FoamBot, saying: “By carrying a selection of collapsible molds and a foam generator, a robot could form end effectors on a task-by-task basis – for example, forming wheels for driving on land, impellers and oats for crossing water, and high aspect ratio wings for gliding across ravines. Molds could also be made of disposable material (e.g. paper) that forms part of the final structure.”

[via IEEE Spectrum via Dvice]