Great minds do think alike. I’m sure some of you still remember the Sixthsense wearable computer by Patti Maes and Pranav Mistry. Here’s an very similar concept device that uses different hardware to arrive at the same functionality. Developed by Chris Harrison, the OmniTouch uses a Kinect in combination with a tiny projector, letting you use your body – or pretty much anything really – as a touchscreen. 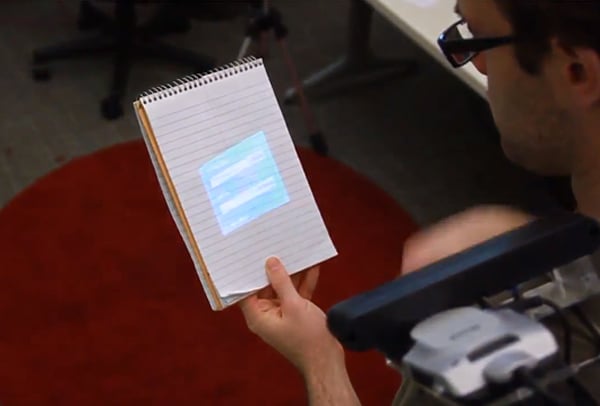 Whereas the Sixthsense requires that the user wear color-markers on his fingers so that the camera can track them, the Kinect does all the work in Harrison’s concept device. The OmniTouch is also slightly more compact than the Sixthsense. It’s also shoulder-mounted, making you look like a robot pirate. Or a bird trainer.

I wonder if this will be the next big thing in portable computing immediately after tablets. Both the Sixthsense and OmniTouch are great concepts – they encourage people to go out and interact with the world instead of mooring us on our chairs or beds.  We’ll be able to hold our own drive-in and outdoor theaters, augment analog games with digital enhancements and access information about anything we encounter – animals, plants, gadgets, food, landmarks. And we’ll be able to publicly bitch about how this magical device has a short battery life and that the screen isn’t too bright or some other thing that doesn’t please us. Instead of graffiti, memes, Twitter feeds and Facebook wall posts will be projected on walls. Wow. I just made myself sad.