We’ve seen robots that are capable of riding bikes (and unicycles) before, but usually they are slower than this guy. PRIMER-V2 also seems to have a ton of confidence. It’s crazy how good this little ‘bot is at riding his bike. I now foresee a future where bots will roam the streets doing sweet tricks on their BMXs and Huffys. Do they still have those? 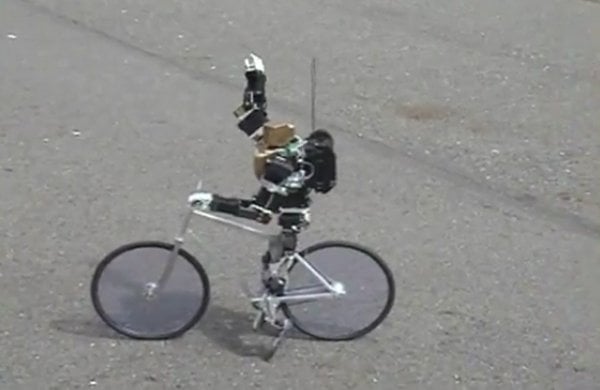 This bot can reach speeds of 6 mph and uses centrifugal force from its front wheel and a gyro that helps with steering when going in a straight line. He really looks like a kid that just learned to ride and is doing great. And just like a kid, PRIMER-V2′s braking method is to use its metal feet to slow the forward motion of the bike.

At times, our robot future is looking less scary at times, and more comical. I can’t wait to see all of the bike-riding and skateboarding bots at various parks and playgrounds. First they took our jobs, then they took our kids’ pastimes.