Remember the Ultimate FPS Simulator that The Gadget Show teased last week? The UK-based TV show has uploaded their Oct. 24 episode on YouTube, where they finally share how the simulator was built and of course a couple of demos, including – okay you just went on YouTube didn’t you. Settle down. Or scroll down. 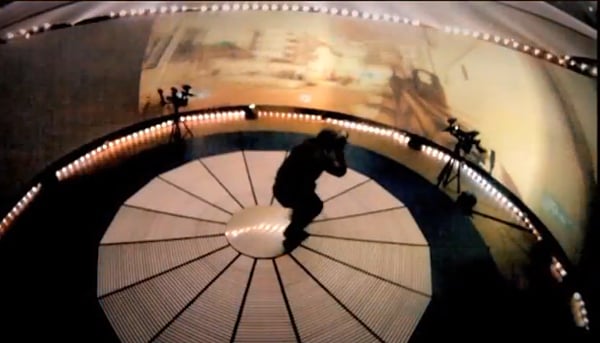 The whole setup took about 6 weeks and £500,000 (~$650,000 (USD)) to build. Some of the tech used in the simulator include the Igloo Vision, a 360º projection dome with 5 HD projectors, an omni-directional treadmill with IR motion-tracking, ambient lighting, automated paintball guns, a Kinect working with custom software and… an iPhone strapped to a plastic gun. No surprise which of these is the weakest link. Watch the video to find out what I’m talking about. Skip to about 9:20 if you just want to see the simulator being used, including a test by a famous former SAS operative.

I’m not even a fan of FPS, but I still want to try it out. My only question is, can the whole setup actually cover a typical game’s controls? I know that The Gadget Show only used a pre-release version of Battlefield 3, but I’m still curious as to how such a setup would cover all the commands (skip to 0:57 to see the key bindings in BF3) that modern-day games have. We saw that the left- and right-click are covered by the toy gun and the iPhone, the Kinect takes care of jumping and crouching, the treadmill takes care of movement, but what about getting into vehicles, changing weapons or throwing grenades? Then again I guess the Kinect could be used to take care of those as well.