Man Gets a Smartphone Dock Built into His Limb (His Prosthetic Arm, That Is)

It’s already hard enough trying to balance everything, even when you’ve got two arms. There’s a reason why people are warned against using their smartphones while driving, while crossing the street, or when doing other stuff that requires a person’s full attention.

But what’s a guy to do if he was born with just one arm? Get a smartphone dock built into his prosthetic limb, that’s what. 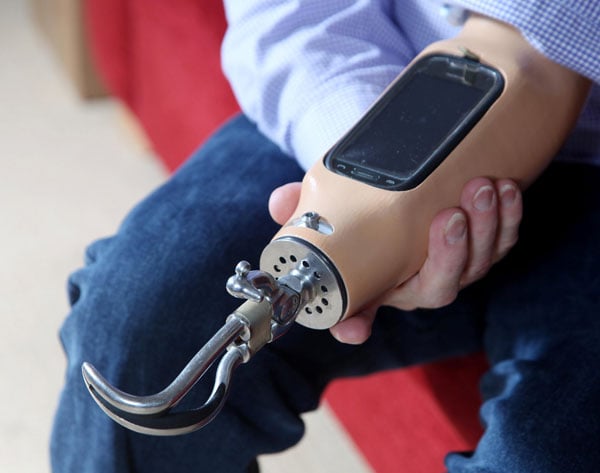 Trevor Prideaux, who manages a catering company, found it increasingly difficult to call or text his friends, family, and contacts while he was on the go. So an idea came to Trevor one day as he was trying out the iPhone: why not embed it into his arm? He tried reaching out to Apple to obtain a blank iPhone casing, but they weren’t interested. He shelved the idea for a while, but then tried again, this time when he was getting his Nokia phone upgraded.

Nokia gave him the nod, and, together with the technicians at the Exeter Mobility Centre, Trevor got his one-of-a-kind smartphone dock-embedded prosthetic arm built. Prosthethist Steve Gallichan, technician Les Street and undergraduate worker Sarah Bennett worked around the clock to deliver the prototype to Trevor in five weeks.

It’s interesting to see if EMC or other prosthetic makers can come up with a mainstream process to incorporate docks into replacement limbs for all the other people who might need one.

[The Telegraph via Geekosystem via Oh Gizmo!]