Programmer/Dad/Casual Mindstormer Hans Andersson has earned a reputation on the mean and geeky streets of the Internets as a LEGO Mindstorms master. His first two Mindstorms creations were machines capable of solving a Rubik’s Cube and Sudoku. His latest LEGO contraption has a much simpler task, but it goes about it in a manner that is hypnotizing in its complexity. 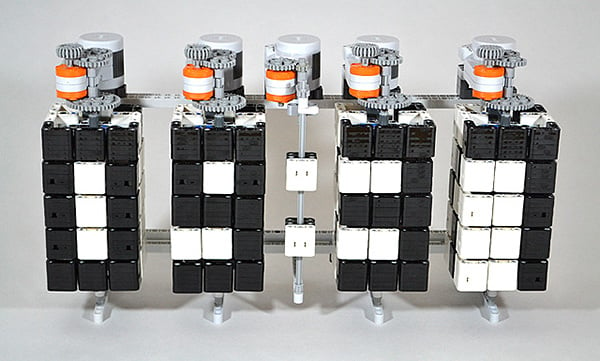 Mr. Andersson (you will now re-read that and all succeeding instances of Mr. Andersson in Agent Smith’s voice) calls his clock the Time Twister. It’s powered by two LEGO Mindstorms NXT micro-computers chatting over Bluetooth. The master NXT keeps track of the time, handles the minute digits and never pays the slave NXT, despite it’s important task of changing the hour digits as well as flashing the separator to indicate the second. 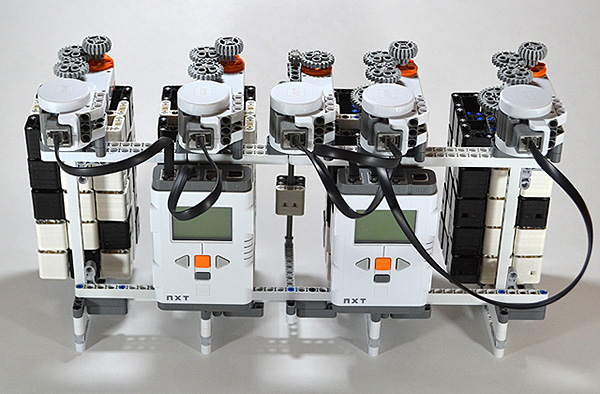 Speaking of the digits, as you can see in the pictures they’re each made of five layers of black and white tiles. Each layer is arranged in fixed patterns. Mr. Andersson describes the Time Twister’s mysterious ways as such: “By twisting the top layer back and forth in a specific pattern, you can arrange the layers so that the desired digit is displayed.”

This purposeful movement is what makes the clock fascinating, but you’ll also have to keep your eye on it because the whole thing happens quite slowly, it takes about half a minute to update the display. Thank god it doesn’t display the seconds.

Squeaky separator is squeaky. If Mr. Andersson’s past behavior is any indication, he will soon post the parts list, NXT files and the building instructions on his website so fellow Mindstormers can make their own Time Twister and come closer to defeating the machines. Also, Mr. Andersson.