Parents and teachers have taught us at a young age not to “judge a book by its cover” because sometimes, it’s what’s on the inside that counts – and this doesn’t just apply to people or actual books, either. But it’s pretty hard not to judge this one based on how it looks, because it’s sort of carrying a whole lot of baggage on the outside. Only, it’s not the kind of baggage that you think it is. 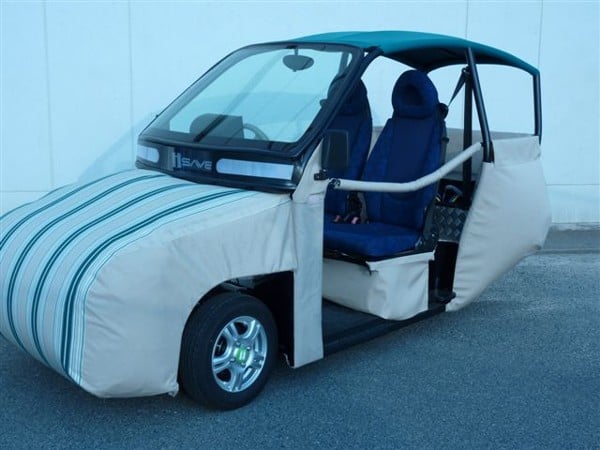 The  iSAVE-SC1 vehicle has been dubbed as the “safest electric vehicle in the world” by Humanix, the company responsible for developing it alongside Hiroshima University. It diverges from how cars are usually made, since the airbags are usually hidden in the wheel or dashboard of vehicles, and not “worn” all over on the car’s exterior.

Another thing that makes the iSAVE-SC1 different from most cars is that it only has three wheels instead of the usual four.

It’s obviously a pretty small vehicle, only seating up to three persons comfortably. Humanix plans to sell the first units of the car this November for appx. $10,400 (USD), while mass production has been slated for sometime in 2012.

I don’t know how effective it will be in cushioning the blow upon a real-world impact, but what’s pretty obvious is that this car won’t need any paint jobs at all after a collision.

[via TechCrunch via Oh Gizmo!]