Last-Minute Costume Idea: Cut a Hole in Your Torso with Two iPad 2s

If you still don’t have a Halloween costume, you’re probably left to the dregs of the random ill-fitting Scooby Doo and Teletubbies costumes at your local Wal-Mart. But if you and a buddy can spare your iPad 2s for the night, you could end up being the life of the party. 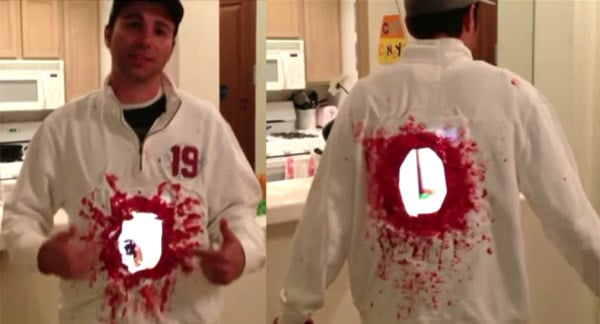 By taking a pair of iPad 2s and strapping them to his chest and back using duct tape, Technabob reader Mark Rober managed to make it look like he had a huge gaping hole in his torso. The trick is actually pretty simple to pull off. Just connect the two devices via Wi-Fi (or a pocket hotspot), and turn on a FaceTime chat between the two.

The one in the back uses its front-facing camera to capture what’s behind you, and the one in the front grabs what’s in front. They each show the others live video on-screen, creating an awesome illusion that makes it look like you can see right through your body. While I’ve seen this idea done before, it’s always required a ton of build time and hacking. This idea only requires a couple of iPad 2s, some duct tape and a Wi-Fi network.

Of course, it’s not exactly the cheapest Halloween costume, but if you do have a couple of iPad 2s lying around, it’s actually pretty easy. And if you have a few iPhone 4s on hand, you could even create a bullet-riddled corpse effect.

[Thanks for the tip, Mark!]

Lighting up the Place