I’d like to think that I’m not as cynical or heavily nostalgic when it comes to video games, but sometimes I do miss the simpler times of gaming. Back in those days I didn’t have to download a patch every week, and then after downloading that I have to download another patch for the game I’m about to play, even if it was released just a week ago (I’m looking at you, NBA 2K12!). But Redditor p4warrior also reminded me of another thing that’s getting out of hand with video games:

The table above is from Wikipedia, and it tracks all six retail editions of the soon to be released Assassin’s Creed: Revelations. There’s the Standard Edition, the Animus Edition, the Collector’s Edition, the Special Edition, the Signature Edition and the Ultimate Bundle.  But no single bundle has all of the bonus items. For clarity’s sake I’ve revised this post and am only now showing the two most complete editions. 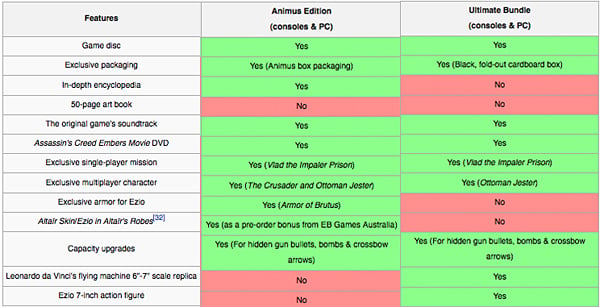 If you want to get all of the physical bonuses, you get the Ultimate Bundle. If you want the in-game bonuses you spring for the limited Animus Edition. If you want both right away? Buy both. 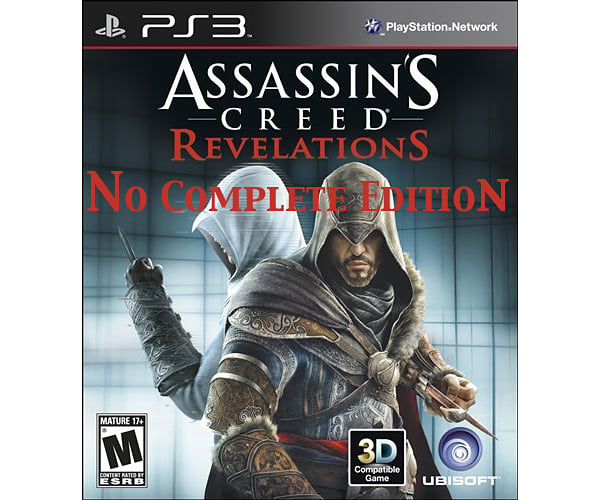 You can pre-order the Standard Edition of Assassin’s Creed at Amazon, the Collector’s Edition from Amazon UK, the Special Edition from Gamestation and the Signature Edition and Ultimate Bundle from Gamestop US. I also saw a PS3 version of the Animus Edition at eCrater for $500 (USD), an Xbox 360 version at the UK Ubi Shop going for £68 (approx. $109 (USD)) and a PC version at Gamestop UK going for £60 (approx. $60). Whew.

But if I were you guys I’d choose between the standard edition and the Ultimate Bundle. We have to put a stop to in-game pre-order exclusives.