Robot Makes Like a Gecko, Climbs Walls, Won’t Try to Sell You Insurance

The gecko. Nature’s car insurance salesman, climber of walls, rocks and trees everywhere. Roboticists are finally getting a handle on how to mimic this creatures characteristics in robot form. 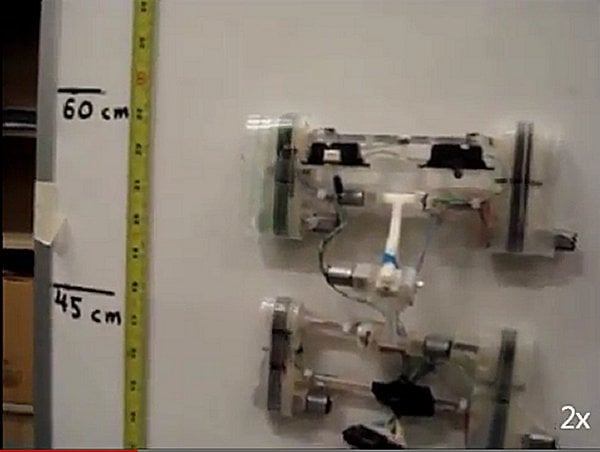 The gecko lizard can scale walls and ceilings of any texture, even something as smooth as glass. How do you duplicate that feat in a robot? The lizard’s feet cling to surfaces thanks to molecular forces and this has been a challenge.

Now a Canadian research team has gotten very close. They have designed a tank-like robot that can roll up walls using the same molecular “clinging” technique. The robot can cling and move around on a variety of smooth and uneven surfaces and can support it’s entire weight while doing so. This technology has all kinds of applications. From window cleaning, to spying, to climbing the debris in disaster areas.

Unlike other animals, the gecko sticks to walls and ceilings using the very force that attracts molecules together. This force is called the Van der Waals force. Here’s how they explain it:

A gecko’s toes are covered with tiny hair-like fibers called setae and each of these is covered with tiny structures called spatulae, each less than a micron wide. (Thousands could fit in a human hair). Molecules on the surfaces of the spatulae are attracted to molecules on the wall. On each individual spatula, the molecular attraction is very weak. But working together, the Van der Waals forces between the molecules of the spatulae and the surface are enough to hold up the entire gecko. In fact, the force is so strong that some species of gecko could theoretically support the weight of an entire human.

Lots of small structures working together to create a larger force. The key here is that they have found a way to not only make artificial setae, but they have made them strong enough to carry the weight of the robot, while being more responsive to changes in surface roughness and they are shaped into a band that is essentially a tank tread.

Now that they have figured out some key factors with this robot, I can’t wait to see how much more they can learn.