Over the years, R2-D2 has proven himself to be a pretty versatile droid. He can play holographic messages from Princess Leia, hack into computer systems, repair other droids and even swim through swamps. But did you know that R2-D2 can play music too? At least this new R2-D2 MP4 player can. 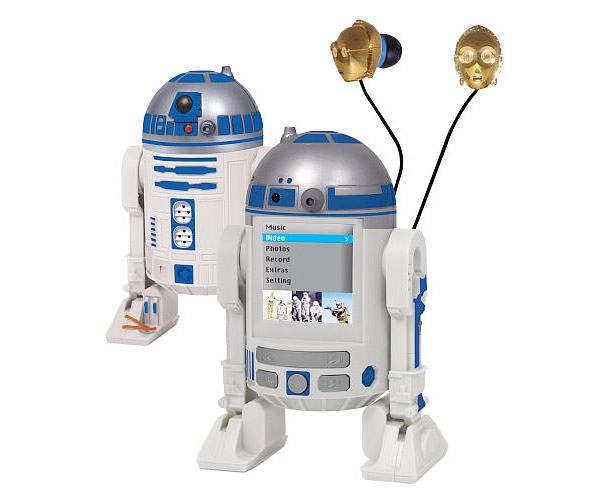 I actually want to call this little droid R2-MP4, since I think that would be a more appropriate name. The musical R2 unit even comes with earbuds which look like C-3PO’s head. Hopefully, when you stick them in your ears, he won’t go blathering on about how he he’s fluent in over six-million forms of communication, and just let you listen peacefully to your playlist.

Now, this R2-D2 media player isn’t exactly high-end. It’s only got 2GB of storage – or about 500 songs, and despite the screenshot above, I’m not convinced it can play video or view photos. That sure looks like an screen grab from an old iPod with some Star Wars images tossed in. But I could be wrong. Heck, maybe it can project holograms and hack into the Death Star’s security system for all we know.

Anyhow, if you’re buying this, you’re probably not getting it for its tech specs, and just because you have to own every Star Wars gadget and gizmo. R2-MP4 sells for $44.99 (USD). If you want one, you’ll have to go to your local Toys R Us and poke around, as they appear to be sold out online right now.