Moto Undone: Has Anybody Seen My Motorcycle?

I used to think that motorcycles were like bicycles that were made for lazy people. They certainly weren’t as roomy or comfortable as a car, that much was obvious, and they definitely require less effort on the part of the rider to keep things moving than a bicycle. I wouldn’t say motorcycles are a cross between cars and bicycles, although some models I’ve seen lately are making me reconsider that thought.

And then here comes Joey Ruiter, a designer who decided to render his vision of a stripped-down electric motorcycle by taking away all the macho-looking frills and design elements to come up with Moto Undone.

Ruiter explains: “[We wanted to] re-set the definition of a motorbike by stripping away historical attributes that make them so great. Moto Undone is pure generic transportation and by motorbike category definition, it isn’t very cool. The motorbike references are small and when someone is riding, they are all you see.” 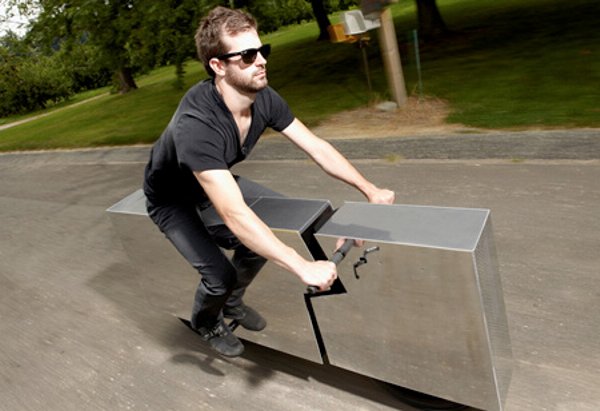 While the Moto Undone is definitely stripped-down in terms of design, its other specs aren’t really very shabby. The motorcycle is actually powered by a 1000w 48v electric hub motor and has a range of 90 miles. Other riding information and gauges are can be accessed through a smartphone–which is something you can’t do while you’re riding on it because, you know, it’s not very safe to fish the device out of your pocket and steer yourself on the road at the same time.

The Moto Undone was put on display recently at the Grand Rapids Art Museum.