If you are rich enough to afford your own battling robots, these Bionic Bopper Cars will be your next purchase. You and a friend can battle with these motorized robots. They allow you to stand inside the protective cage and throw punches like a large game of Rock ‘Em Sock ‘Em Robots. 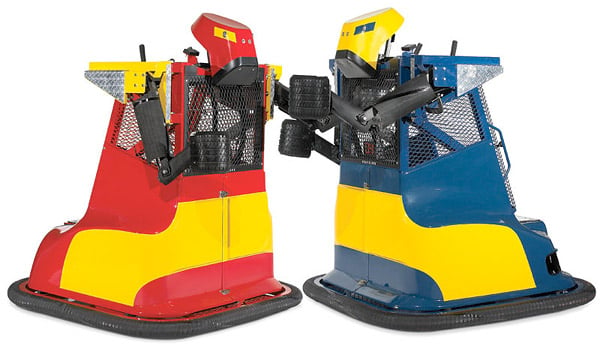 When you connect, the robot’s head flips back. Bumper cars and robots! Why didn’t I think about that? They can hold drivers up to 300 pounds and they have some power since they are powered by Honda gas engines that will give you a max speed of 3 mph.

The controls are in the cockpit. You get some buttons on two joysticks that activate the arms to land all of those punches. They are good for up to 5 hours of fighting and driving thanks to rechargeable 12-volt batteries built-in. If you have a spare $17,000(USD) you can buy them from Hammacher Schlemmer.

[via Random Good Stuff via Gizmodo via Geeky-Gadgets]