Have you ever wanted a Mogwai? You know, those creatures from Gremlins who remain cute and cuddly as long as you don’t expose them to sunlight, feed them after midnight or get them wet? While this new toy from Japan doesn’t really look like a Mogwai, it does sing like one. 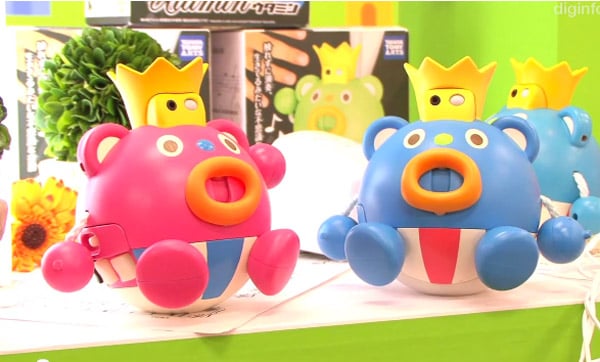 TakaraTomy Arts recently showed off Utamin, a strange looking, rotund creature who basically does just one thing – sing. But Utamin doesn’t just vocalize like you’d think – it works like a theramin. You know, those weird otherworldly sounding instruments used in retro science fiction movies? Just like a theramin, Utamin makes sounds when you place your hand near it. It doesn’t sound or look as cute as an actual Mogwai, but I’ve been having a hard time finding any old Chinese antique dealers to sell me one of them ever since a certain incident back in the 1980s.

As you can see in the video above, Utamin offers three different song modes: playing “familiar” pre-programmed tunes, “Nori-Nori” rhythm mode, and another mode where you can play any note in the musical scale. I can’t wait for the YouTube vids of people playing the Super Mario Bros. or Star Trek theme on this thing. Two Utamins can also communicate via infrared signals, and sing a little duet.

Utamin will be available in Japan later this month, and sells for ¥3,990 (appx. $51 USD). No word on when you’ll be able to get one here in the states, but I’m sure one of the various gadget importers will eventually bring these creatures across the Pacific. No matter what though, don’t get them wet on the way over.

(UPDATE: Looks like you can order Utamin from Strapya World already.)