Researchers Try to Turn Urine into Biofuel, Destined to Celebrate with a Urinal Cake

Fuel cells. Where are they? They still have not hit the market and replaced batteries. It would be nice to see them in daily use since we would just need to refill them with liquids instead of wasting so many batteries and having them end up in landfills. 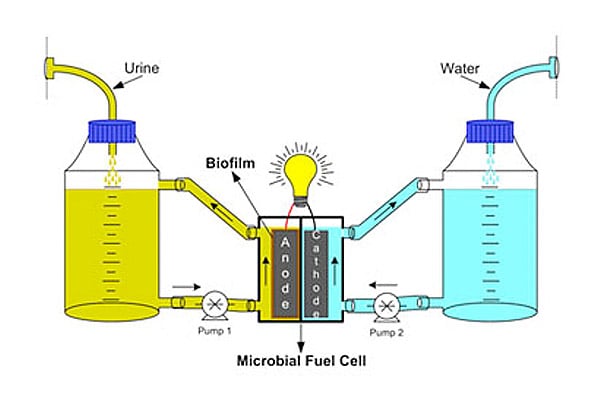 Part of the problem is having an infrastructure and supply chain for such liquid refills. That’s where urine comes in handy. We all produce it everyday, so it is widely available and cheap. Researchers at the University of the West of England in Bristol have started experimenting with urine as the fuel for a microbial fuel cell.

Microbial fuel cells generate their power from bacteria feeding on the sugars and give off electrons. Did you know that humans produce 6.4 trillion liters of urine every year? That’s just humans. If you include farm animals there’s 38 billion liters every day right there.

So far, tests have produced a very small amount of power (peaking at whopping 8 milliamps). By miniaturizing and stacking microbial fuel cells, they hope to increase the power significantly. It’s fascinating stuff. Just think – one day our toilets could power our homes.

[via BBC News via geek]