With its Siri personal virtual assistant technology in the iPhone 5, Apple has proven that we’re willing to converse with our technology – assuming it has more of a personality than your average “say one for tech support” voice recognition system. With Siri’s demeanor being somewhere between helpful and smart-ass, I still can’t see her being helpful if you need to off some humans. That’s where the Terminator T-800 Virtual Assistant comes in. 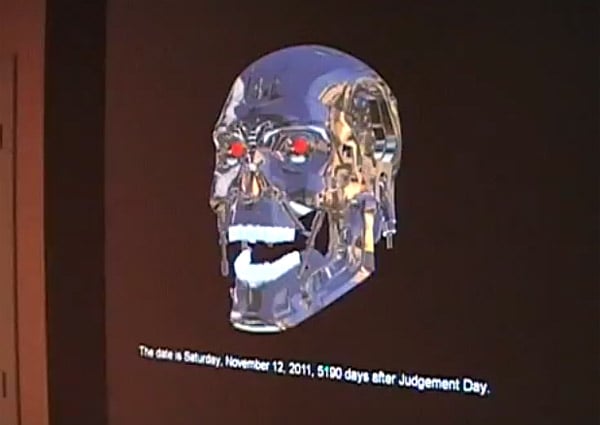 When YouTuber programming4fun found this awesome 3D model of the metal T-800 from Terminator 2, he was inspired to make his own “special” personal assistant. Using a Microsoft Kinect to do head tracking, he was able to not only make it so the floating Terminator head looks like a floating hologram, but used the speech recognition so he could ask it do his bidding.

Damn, I was hoping that its voice would sound like Ahnold. At this point, the T-800 personal assistant seems pretty docile – unless you mention John or Sarah Connor, but that’s to be expected. Now as long as we don’t ever combine this technology with the ham-boning robot, we should be pretty safe for now.