Pillow Robot Stops You from Snoring, Promises Not to Kill You in Your Sleep

Jukusui-kun is a robot in a pillow. But it’s not any ordinary pillow-robot. Jukusui-kun helps you stop snoring. If you’ve ever slept with someone that snores, you’ll know that getting a good night’s rest can be a challenge. Heck, sometimes being in the same house as a snorer can be disruptive. Thankfully, the Japanese have solved the problem… with technology! 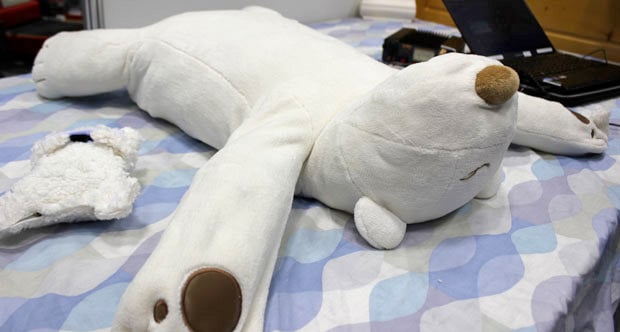 The robotic pillow was developed at the Kabe laboratory at Waseda University in Tokyo. It’s shaped like a bear and is supposed to stop snoring in heavy sleepers. The name translates to Mr. Deep-Sleep. It comes equipped with a microphone to detect snoring. There is also a sensor which monitors your heart rate and blood oxygen levels. Usually, when snoring starts, blood oxygen levels drop and your heart rate goes up. Once snoring is detected, the paws come into action, gently brushing the snorer’s head to stop them from sawing any more logs.

Jukusui-kun was exhibited at the 19th International Robot Exhibition in Tokyo earlier this month, but for now, plans for its commercialization have not been announced.