If this robot snake looks prehistoric to you, that’s because it is modeled after the actual prehistoric snake that shares the same name: Titanoboa. This 50-foot giant weighs over 2,000-pounds and yes it slithers around, making humans run. 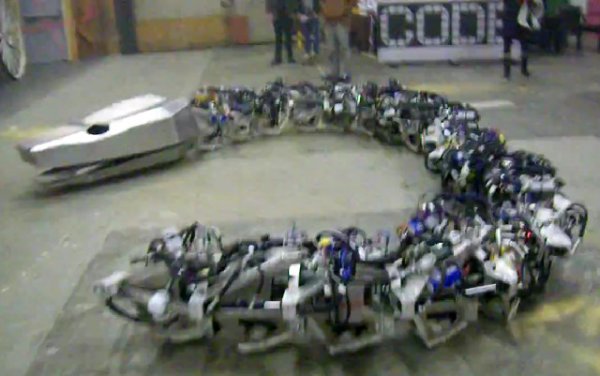 Scary as this monstrosity is, it’s creators aren’t finished. They want to outfit it in better skin and give it the ability to move underwater. Like the real snake, Titanoboa will eventually support a rider, the Mondo Spider, which the same group also built. It can also be seen in the video below.

God only knows what they will build next when they tire of playing with their robot spiders and snakes. I would say that these people need to be stopped, except that if I do say it, they will probably send these metal demons to my house and I will be slowly digested over 100 years in this snake’s belly.

One of the creators says that Titanoboa is supposed to make people contemplate historical climate change. No, that didn’t really work for me. It just makes me want to kill it and save humanity, even though I’d probably just hide in the corner and whimper when that failed.

[via TDW Geeks via Geekologie]