Japan’s Fuji Heavy Industries and Sumitomo have developed a robot that can help human workers clean offices. As a bonus it won’t judge what it saw you doing with your secretary and it won’t comment on that guy drinking himself senseless after hours. 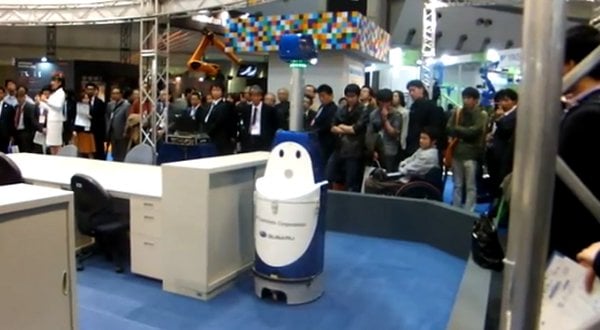 This robot is a follow up to a previous model that the two companies unveiled ten years ago, which was pretty basic. This new version can navigate around desks, office equipment and other obstacles. It’s battery-powered and can move around at 30 meters per minute.

Other features include a laser range finder which it uses to be polite. For example, before bumping into an obstacle or a human, it will say “Please get out of the way, I am cleaning this room!” Okay, so it doesn’t sound very polite, but at least it is trying. If there is no response or movement for 15 seconds, the robot will move around the obstacle and continue to do its job.

I can see office workers having a lot of fun with this ‘bot, dressing it up and hazing the hell out of it.