Most of today’s portable consumer computers are nothing but screen – tablets, smartphones, media players, etc. We also have monitors and HDTVs that have their own USB or HDMI ports. A Norweigan company called FXI Technologies is taking advantage of that and the projected rise of cloud computing by creating a pocket-size computer which has everything but a screen. 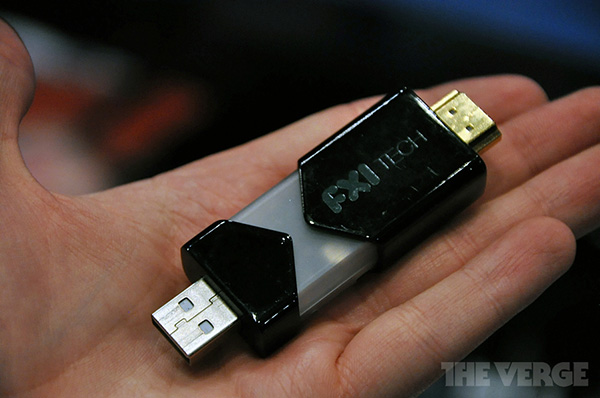 Codenamed Cotton Candy, the device weighs just 21g and can be powered via USB.  It has an ARM Cortex 1.2GHz CPU – the same that’s in the Samsung Galaxy SII – a quad-core ARM Mali GPU capable of processing 1080p video, 1GB RAM, a USB port, an HDMI port and a microSD slot (it’s primary means of storage). It also has Bluetooth and Wi-Fi connectivity. Cotton Candy can run a variety of operating systems, but in the demo video below it’s shown running Android 2.3 while plugged into a MacBook Air and on an HDTV:

So why would you want a device like this when you’ve already got a laptop, tablet or smartphone? FXI has several suggestions, including lengthening the life of monitors, PCs and other gadgets with screens. It’ll also make it easier to run multiple operating systems and drive the cost of owning a computer even cheaper – assuming you have a screen to plug it into of course. And again there’s the much hyped cloud computing.

If we do end up storing and streaming our media en masse on remote servers, it would make sense for people to carry something like the Cotton Candy to plug into dumb terminals to add local functionality. I don’t think it’s a good replacement for laptops, but I could see schools and businesses adopting a system of dumb terminals for students and employees to use and plug into. It makes for more personalized computing at lower costs.

[via FXI Technologies, The Verge & Bored at Work]