Robot Made to Move Human Arm: You Are the Controlled

You read that right. My dream of piloting giant mecha before I die just got turned on its head. A research team at French institute Montpellier Laboratory of Informatics, Robotics, and Microelectronics has invented a system that enables a robot to manipulate a human arm. 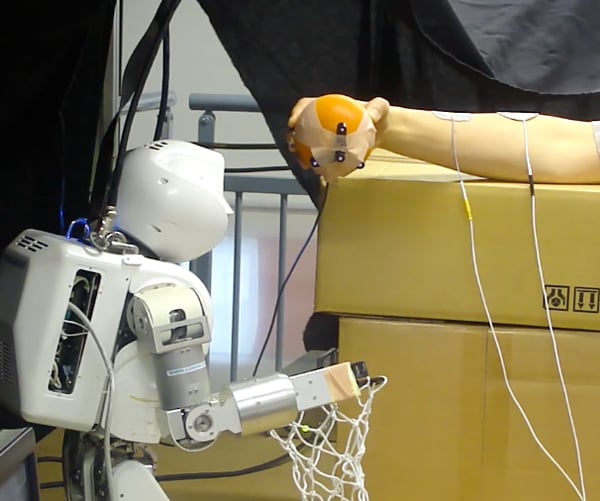 The technology is being developed as part of Project Assist, with the ultimate goal of creating robots that will assist quadriplegic people. Knowing this makes no difference to me, and the whole thing is still creepy. In the experiment captured in the video below, the goal was for a robot to transfer a ball from a human arm and through a hoop. The team attached four electrodes into the arms of five slaves rebels test subjects. A Fujitsu humanoid robot then “took over” – i.e. zapped – the subjects’ arms, making the poor fleshbag move his elbow and open his fingers to surrender the ball.

The audience at the IEEE International Conference on Intelligent Robots and Systems (IROS) “let out a gasp” when the researchers presented the experiment. That’s already a crowd of robotics experts and enthusiasts. When asked if the procedure was safe or if it could be more comfortable, lead researcher Bruno Vilhena Adorno said, “You get used to it.” Clearly Adorno is a robot.

[via IEEE Spectrum via Engadget]