Get a Blue Wii Before Black Friday

Have you been dreaming of adding a powder blue Wii to your gaming arsenal? If so, you are in luck Nintendo fans. Walmart is bringing the new limited-edition blue Wii to the US this Thursday, and you’ll be able to get one for the low price of just $99.96 (USD). 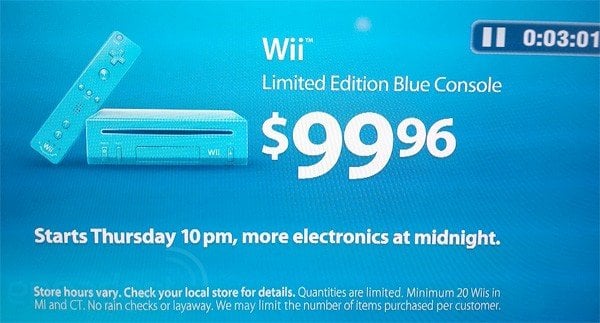 For that price you get the console, a matching Wii Remote Plus and a Nunchuk. These powder blue versions were previously only available in other parts of the world, but now we get our chance to buy them. They will start selling at 10:00PM on November 24th, which of course, is Turkey day. So you can go ahead and stuff yourself, undo your belt and make the drive to Walmart while fighting that post-turkey lethargy.

If you want one, you better line up early, because they will sell out fast.