Now that Super Mario 3D Land is out, the dust on my Nintendo 3DS has finally been wiped off, and I’m actually playing a decent game on the otherwise unexciting handheld. One thing that hasn’t changed – or in fact has actually gotten more irritating – is those damned Koopa shells bouncing around at your feet and tripping you up. It’s just like the older games, except this time they try and knock you over in three dimensions.

Along similar lines, this new Super Mario Bros. Air Hockey game which uses a spinning Koopa shell in place of a puck, and bounces around the turtle in his shell across your tabletop. 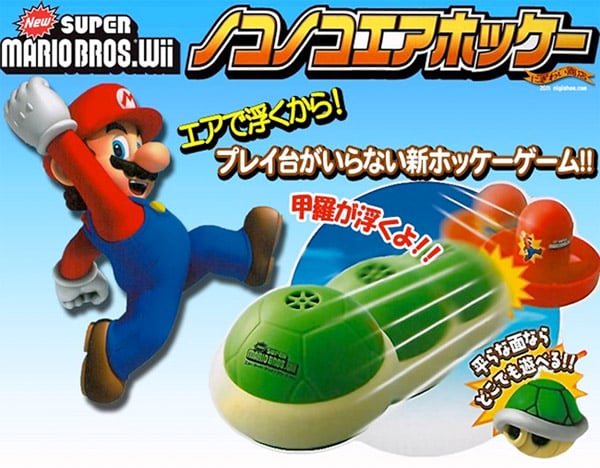 While the Koopa shells have “Super Mario Bros. Wii” stamped onto them, there’s no reason you can’t play a game with these, even if you don’t own a Wii or a 3DS. All you need is a table and a little space. Unlike most air hockey games, the fan is built into the puck, so you can play on any smooth surface – as long as you don’t mind scratching it up with the hockey bats (sticks? red hats?) 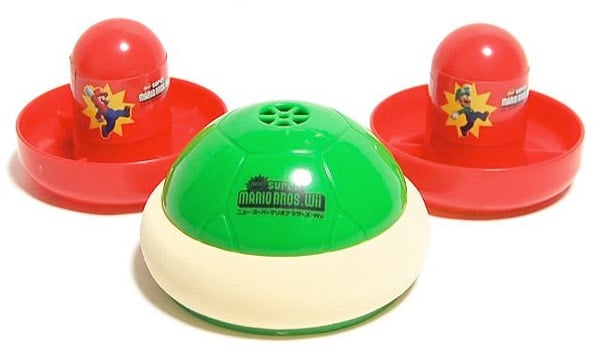 Just don’t try throwing this thing around at any of the Goombas in your office, because you’ll probably end up breaking something, or the Goombas might try and beat you with it instead. Mario fans can get their hands on the Koopa shell air hockey game over at Strapya World for about $14 (USD).