This isn’t the first microwave that I’ve seen with built in YouTube capabilities, but it is the latest attempt. The idea is that human life has become so saturated with mindless content, that we can’t even cook a meal without being entertained. 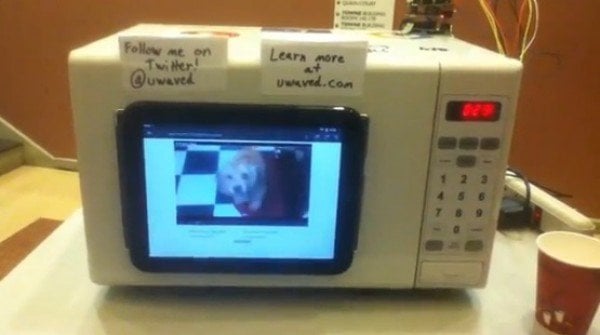 This microwave will play YouTube videos while your food cooks. It does so by matching your cooking time with the highest rated YouTube video of the same length.

The uWave was created by a team of University of Pennsylvania students who were competing in the PennApps hackathon. The team used a tablet computer and some clever coding in order to get it to match the cooking time with YouTube videos. If that’s not enough, the uWave also sends you a text message when your food is done, and Tweets that you’ve used it too.

So, now humans will never be without a cat video or a text message, even when nuking a bag of popcorn. Humanity marches on… Then walks straight into a pole because they were too busy entertaining themselves.

[via Hack A Day via Thatsnerdalicious]