It may sound like an oxymoron, but the Privacy Monitor is actually a very cool and somewhat practical mod by Instructables user dimovi. Only the wearer of a complementary pair of glasses can see what’s being displayed on the Privacy Monitor; everyone else will only see an annoying white screen. 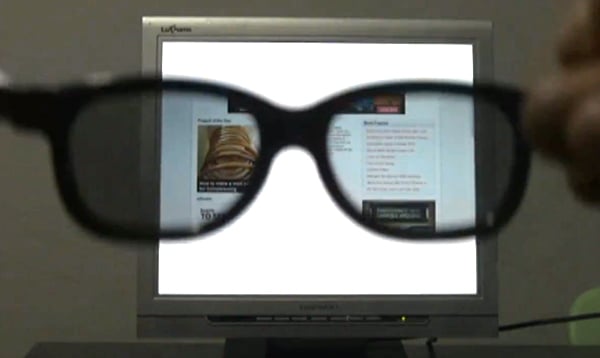 Dimovi was able to pull this off by removing the polarized film within the LCD monitor and attaching it to a pair of sunglasses. You have to be familiar with polarization to understand how this algebraic trick works. I trust in your Googling skills but for now just know that a polarizer – such as the polarized film commonly found in monitors – is designed to allow only a portion of light waves to pass through it. Watch and be amazed:

The PlayStation 3D monitor works in a similar fashion to allow individual players to see just their half of a two-player game.

Unfortunately the polarization mod is as complicated as the property of polarization. It involves a laser cutter, some solvent and a gerbil. Okay I was kidding about the last part. Go undercover and sneak to Instructables to get the details on the mod. This post will not self-destruct.