Things can get crazy when you’re shopping for stuff on Black Friday. Sites crash, people wrestle each other for spots at the register, and some even think that it’s okay to pepper spray other shoppers to get ahead of the queue. Yes, you read that right: pepper spray. 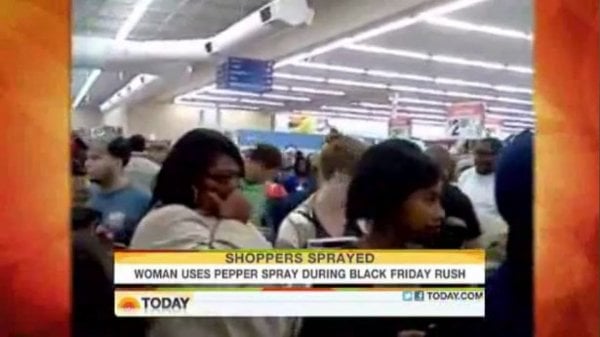 An unidentified woman wanted to get her hands on a discounted Xbox 360 so much, that she decided to dowse other shoppers in her way with pepper spray. Alejandra Seminario, another shopper who happened to witness the entire thing, said: “People started screaming, pulling and pushing each other, and then the whole area filled up with pepper spray. After we paid, we saw five that were in really bad shape. They had been sprayed in the face, it looked like, and they had swelling of the face, really extreme swelling of face, redness, coughing.”

The pepper spray dispersed through the air, causing minor discomfort and itching to the other shoppers who weren’t directly caught in the face by the deranged woman. The crazy thing is, she was able to pay for her purchases and leave the store before the police arrived.

The pepper-spraying shopper was described to be Hispanic in between 32 to 38 years of age. She was described as standing at 5-foot-3 and weighing 140 pounds. She was said to have been wearing black pants and a black sweater during the incident.

For the sake of many, I hope she eventually gets caught! Shame on you, you pepper-spraying shopper!